I’ve just returned from a three week walking tour around La Gomera, one of the smallest islands of the Canaries. COVID-19 put paid to our annual seven week trek across Spain, but with only eleven active cases of the virus and a population smaller than Frome, La Gomera seemed like a safe alternative. I was, nevertheless, more than a little anxious about jetting off on holiday in the middle of a pandemic, but Bristol airport was far riskier than anything La Gomera had to offer. Face masks were worn everywhere by everyone. Waiting staff at restaurants and bars disinfected the table and chairs before you sat down and again after you left. Hotels and apartments were spotlessly clean and we almost fell over the hand sanitiser. And you can see from my pic of Santiago, below, that social distancing on the beach wasn’t an enormous problem either. When we did stumble upon a busy beach in Tenerife, the police were there to manage the crowd. We didn’t see any litter either. 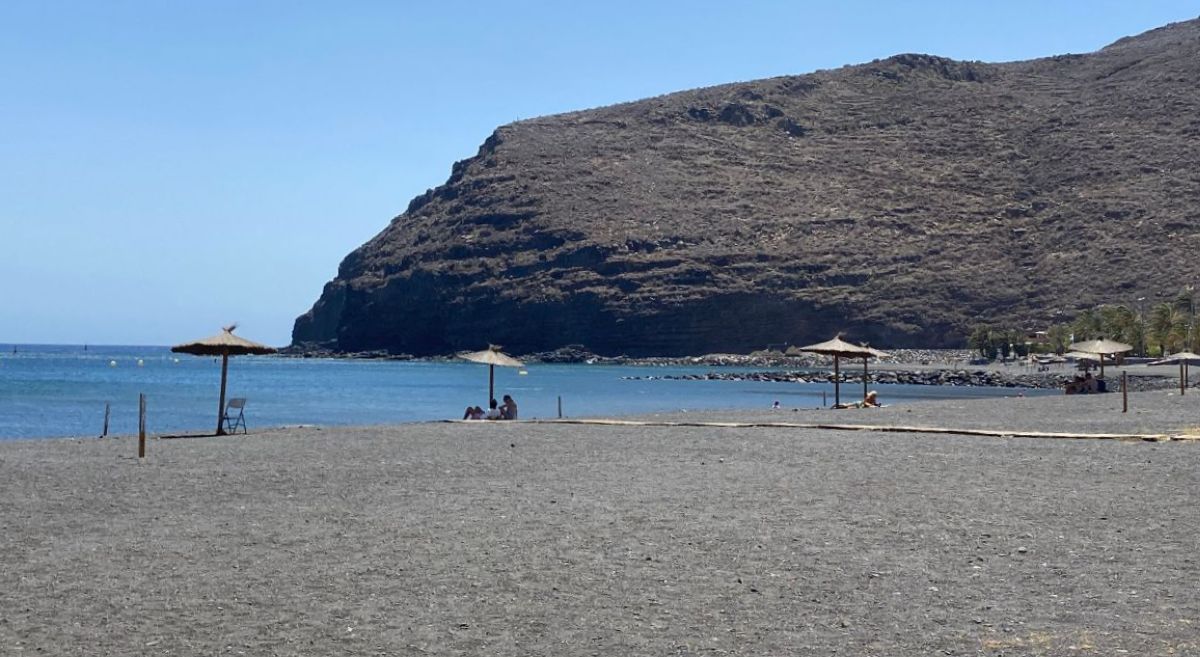 If you follow my Instagram account, you’ll know already that ‘walking tour’ is something of a misnomer on La Gomera. You don’t amble or even ramble; you scramble! The island may be less than 25 kilometres wide, but the tallest peak at Garajonay is over 1400 metres high, so it’s a foregone conclusion that a journey from any one place to anywhere else will involve a great many ups and an equal number of downs – some of them terrifying. 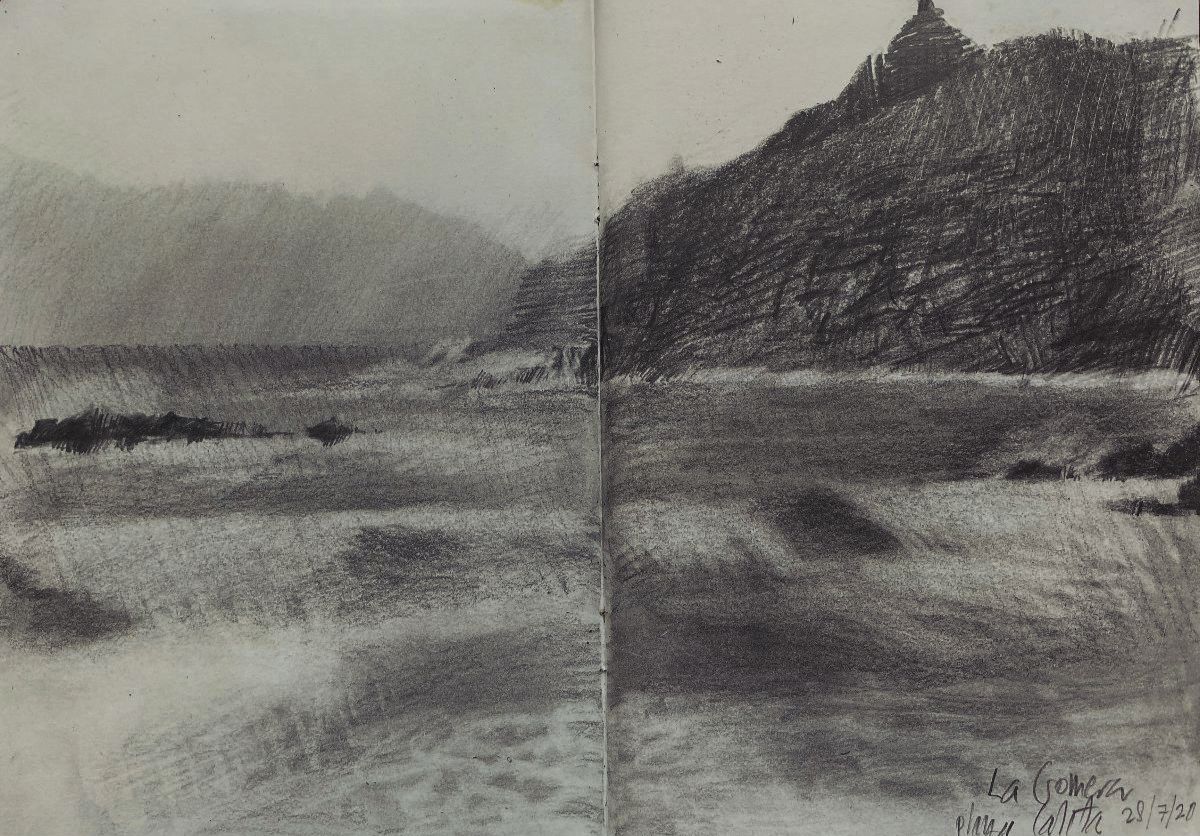 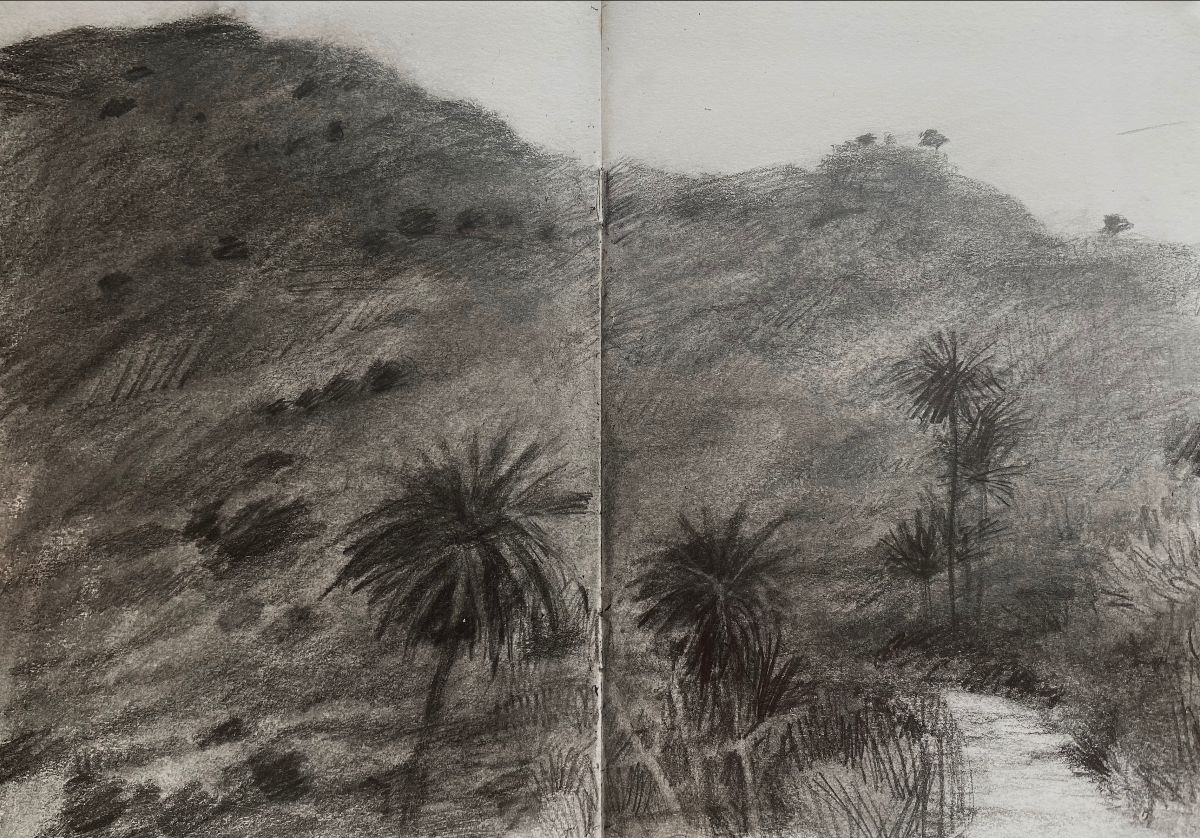 I’d packed my sketching things in my rucksack, of course, but how do you record the colours and textures of such a terrain, when in the blazing sunshine, not a single shadow survives long enough to lend shape to any form? And just what do you make of the countless terraced barrancos, the mist rising from the deep canyons and the nebular forests above, profuse with the island’s own unique flora?

Halfway around the island, after slipping and falling, getting spiked by cacti and lost in a bramble-filled ravine, I tore everything out of my sketchbook and started again…

Sitting on the rooftop terrace of our apartment in Valle Gran Rey with my art stuff and my, now blank, sketchbook spread out on a small table under our laundry, an episode from the early years of my teaching popped into my head.

I was rounding everyone up after an outdoor sketching session when I found one student standing at a five-bar gate, still intently at work. When I peered over her shoulder at her drawing, I saw a page filled with T and C’s. The T’s, she told me, very seriously, were trees and the C’s, of course, were cows.

Fair enough. She’d recorded the things she’d seen and put them where she’d seen them. Isn’t that what we do when we draw? Really, it didn’t seem that far off the kind of landscape art that Henry Fuseli, a bigwig of the Royal Academy in the eighteenth century, derided as ‘mere map work.’ A building here, a tree there, faithfully recorded but devoid of feeling. That’s why my sketchbook was several pages lighter now. There was nothing of the toe-curling sense of overwhelm that I’d walked with every day. I might as well have written M for mountain and B for banana plant on every page. 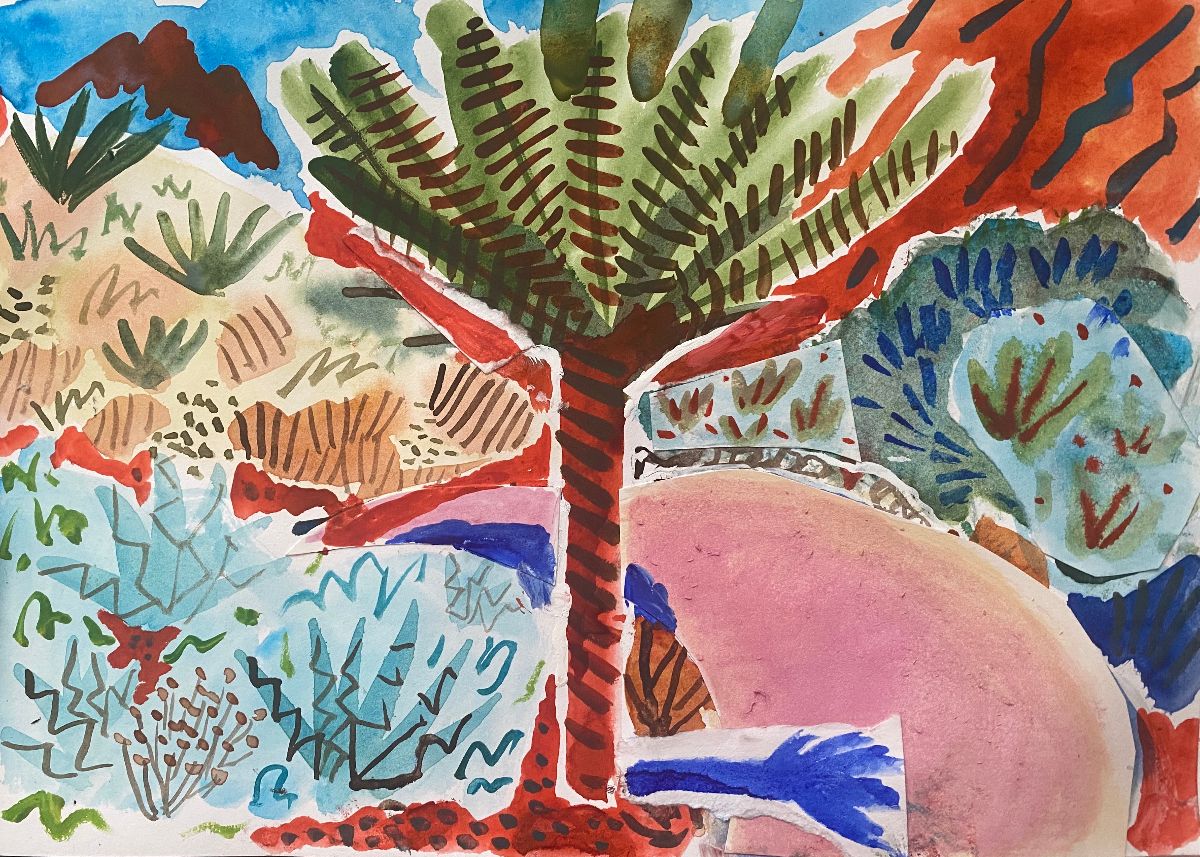 So I put my iPhone and the hundreds of photo’s I’d taken to one side and relied instead on my memory.  My intention? To create a record, not of what I saw but of how it felt to slog through that extraordinary landscape. I used Caran d’Ache Neocolor crayons, a set of italic marker pens and a little box of eight watercolour pans from Sennelier. I kept all the torn out pages, too, painting and drawing over them and sticking them down to create abrupt changes of texture and shape.

I like working with collage. You can move all the elements around until you’ve found the right place – or throw them all up in the air and see where they land! And unlike traditional watercolour, you can cover up the bits that don’t work. It feels, then, like you’re not so much painting a picture as assembling it. The closest I can get to what Henri Matisse called ‘sculpting with colour.’

Painting Between The Words

Jenny Holzer's solo exhibition at Hauser and Wirth, Somerset is predominantly about sex, war and death; a…

In the frog house!

Many years ago, my mum bought a frog. Not a real one, but a wall-eyed,…