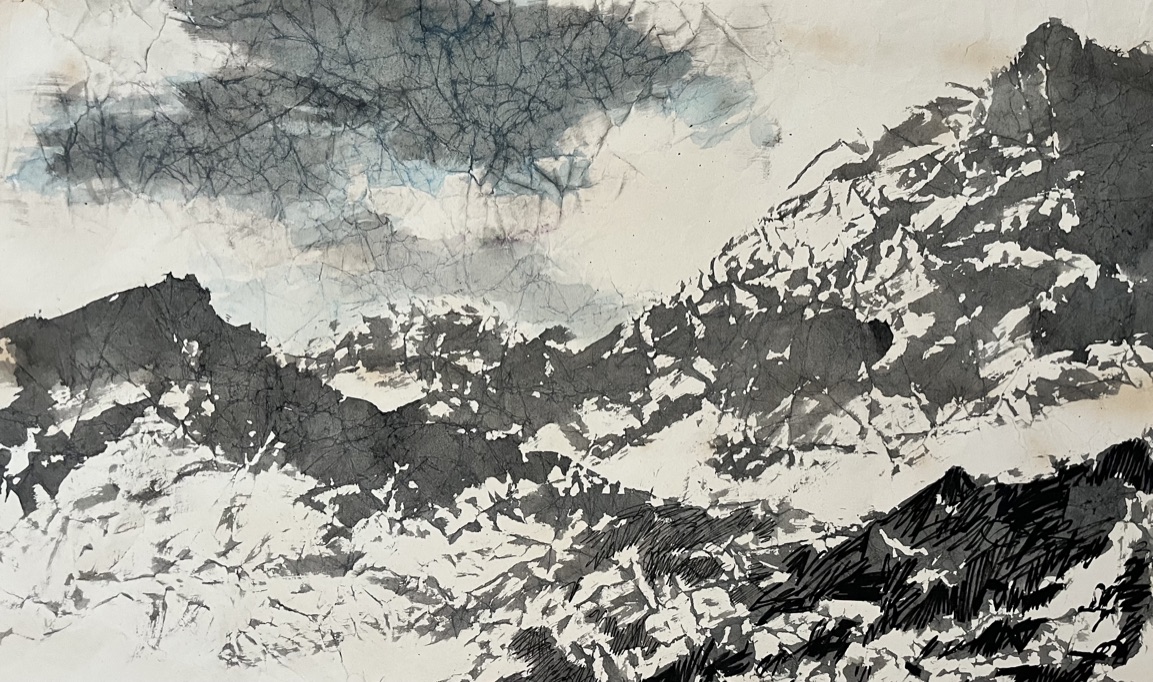 At the end of last year, I wrote a post about Diane Duyser, who made headlines when she saw the Virgin Mary looking back at her from her cheese toastie. She made a shrine for the holy toastie in the hallway, but ten years later, chose profit over piety when she auctioned her miracle snack lunch on EBay for $28,000. Clearly, someone else saw the Virgin Mary looking back at them from the toastie, too. Psychologists call this phenomenon of perceiving meaningful connections between unrelated stimuli ‘apophenia’ (from the Greek ‘to appear’) and ‘pareidolia,’ which is the visual form of this involuntary quirk of human perception, is something that artists have been exploiting, in their own way, for an aeon. 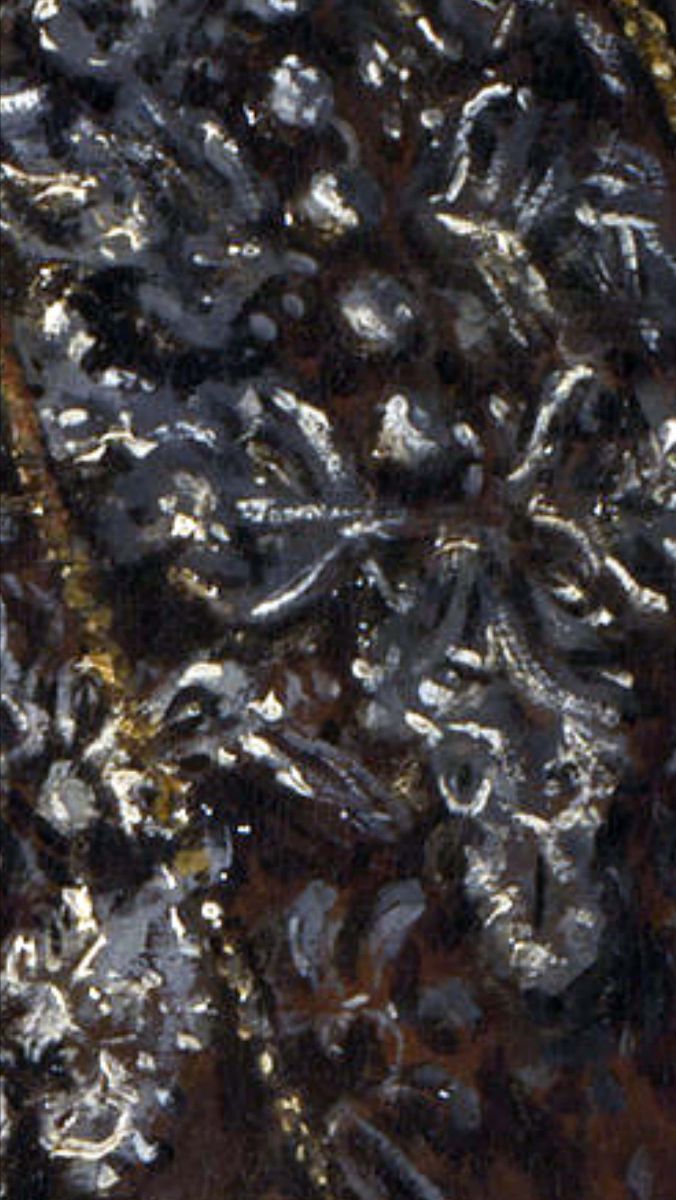 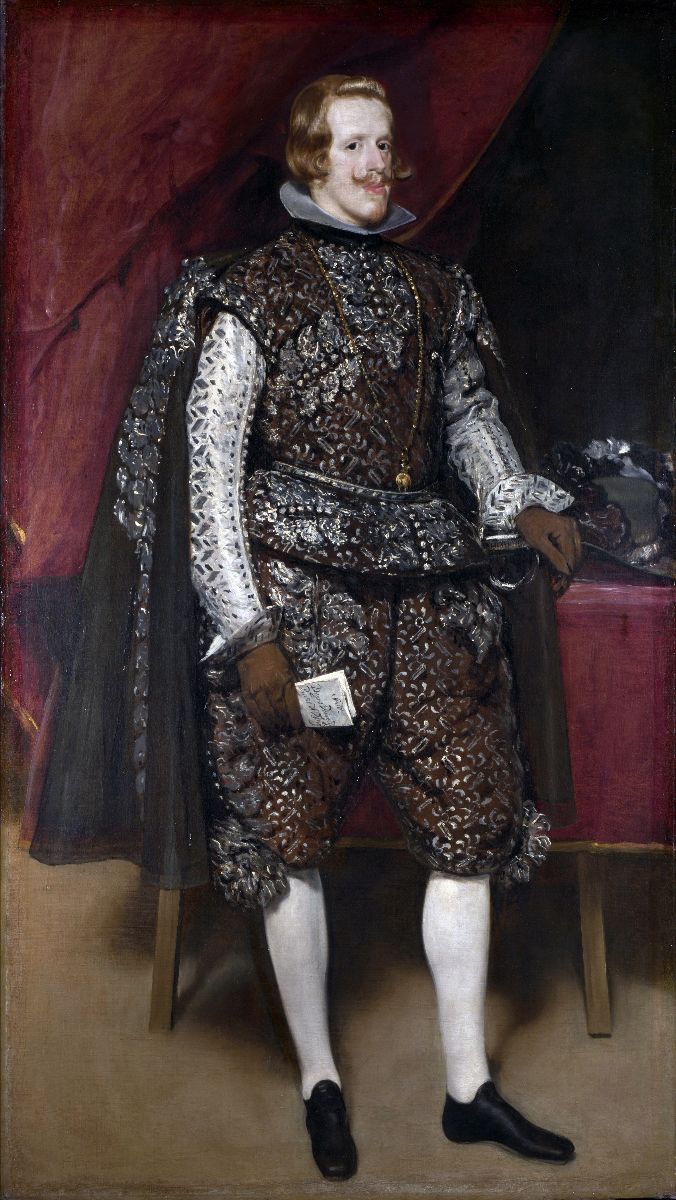 These blobs, painted by Diego Velasquez, for example, are part of the elaborate embroidery on King Felipe IV of Spain’s court dress. 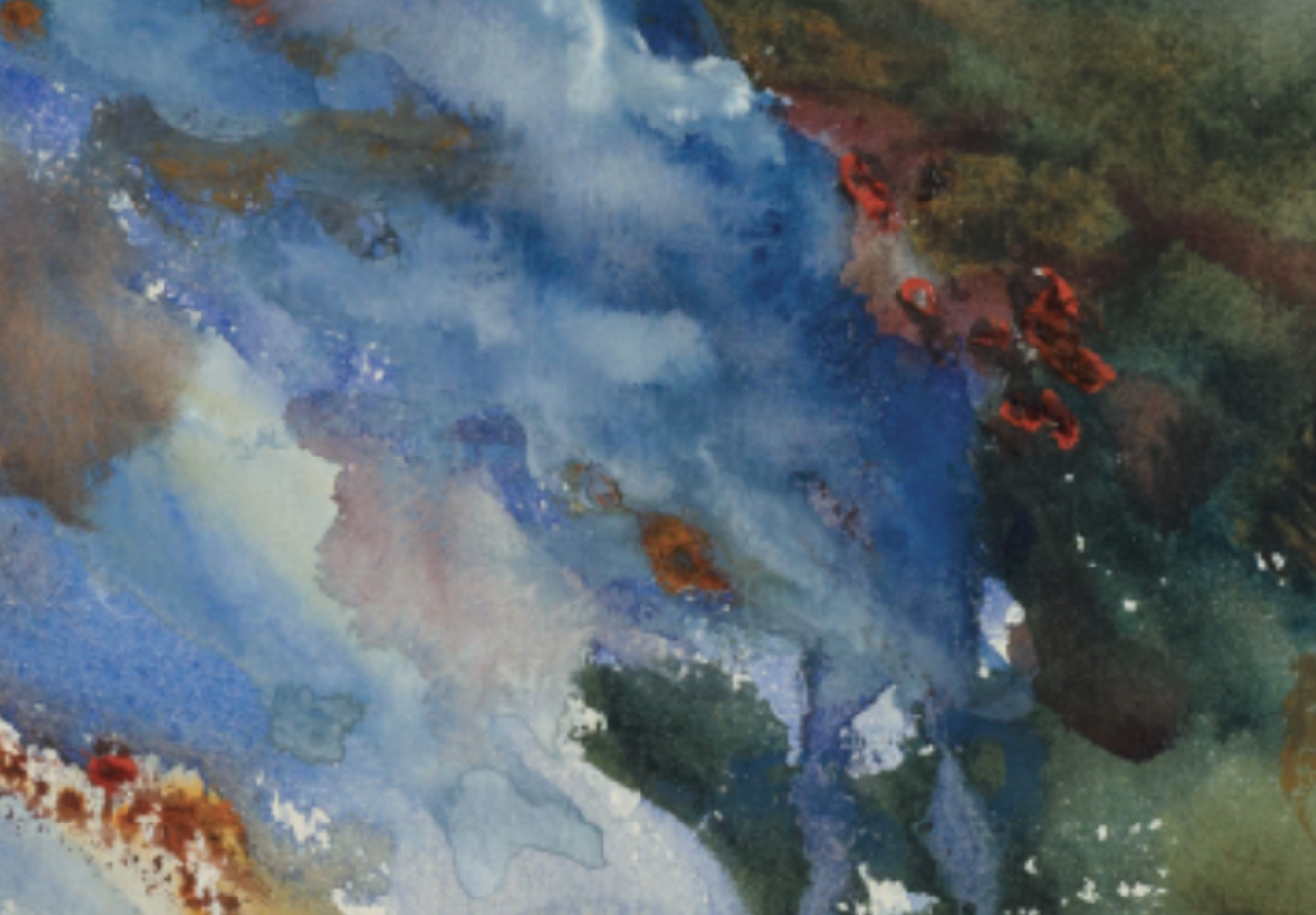 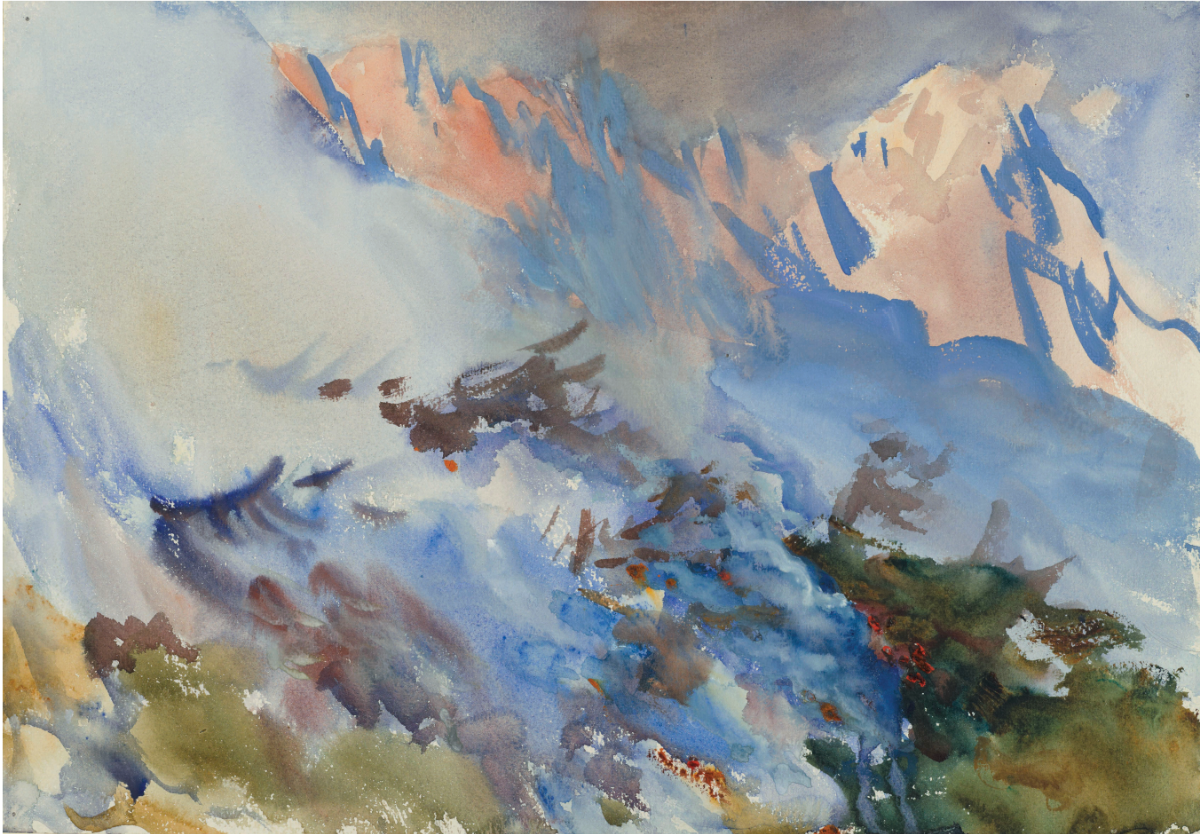 And these were made by John Singer Sargent, when he painted his watercolour, ‘Mountain on Fire’ in 1906. 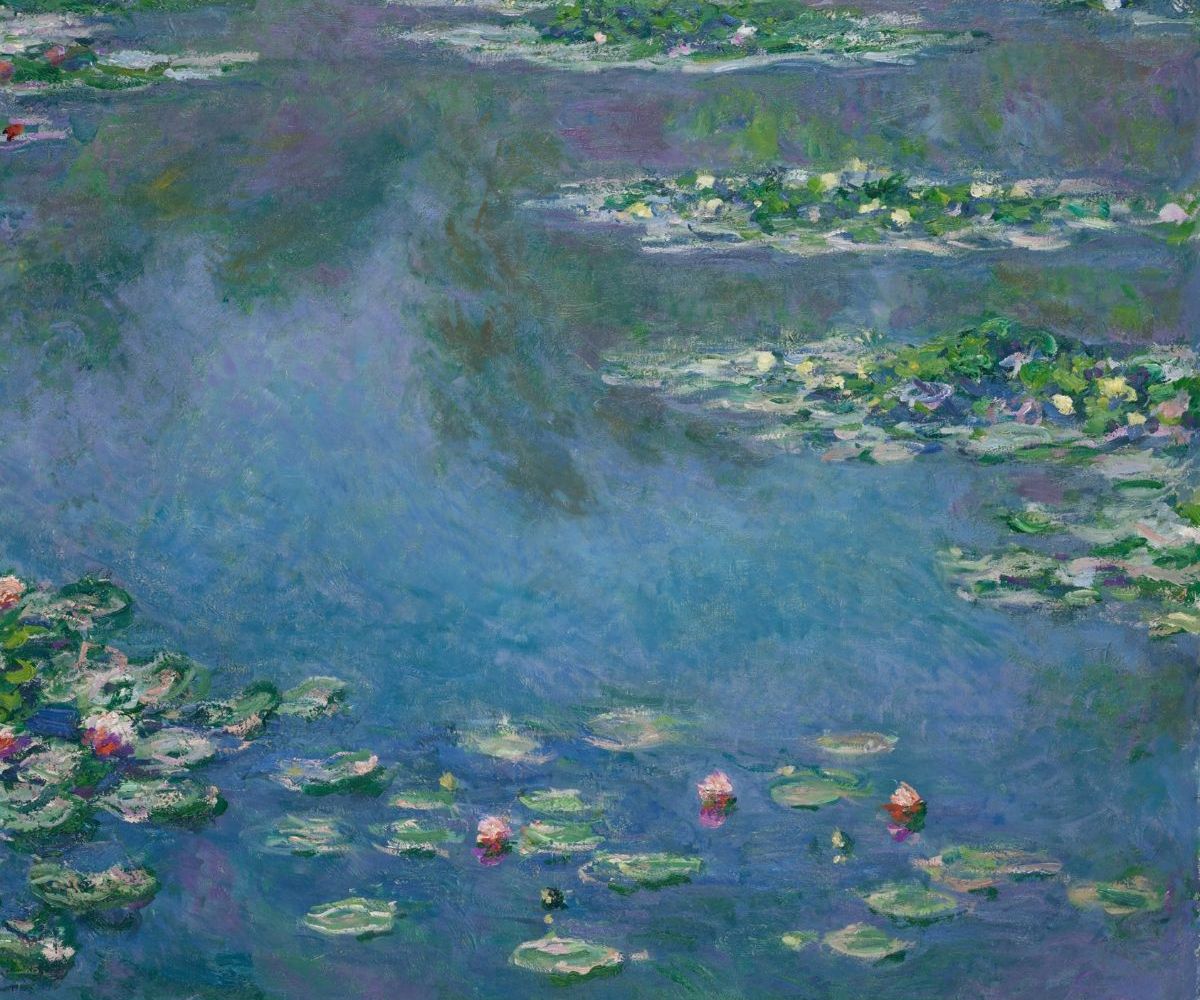 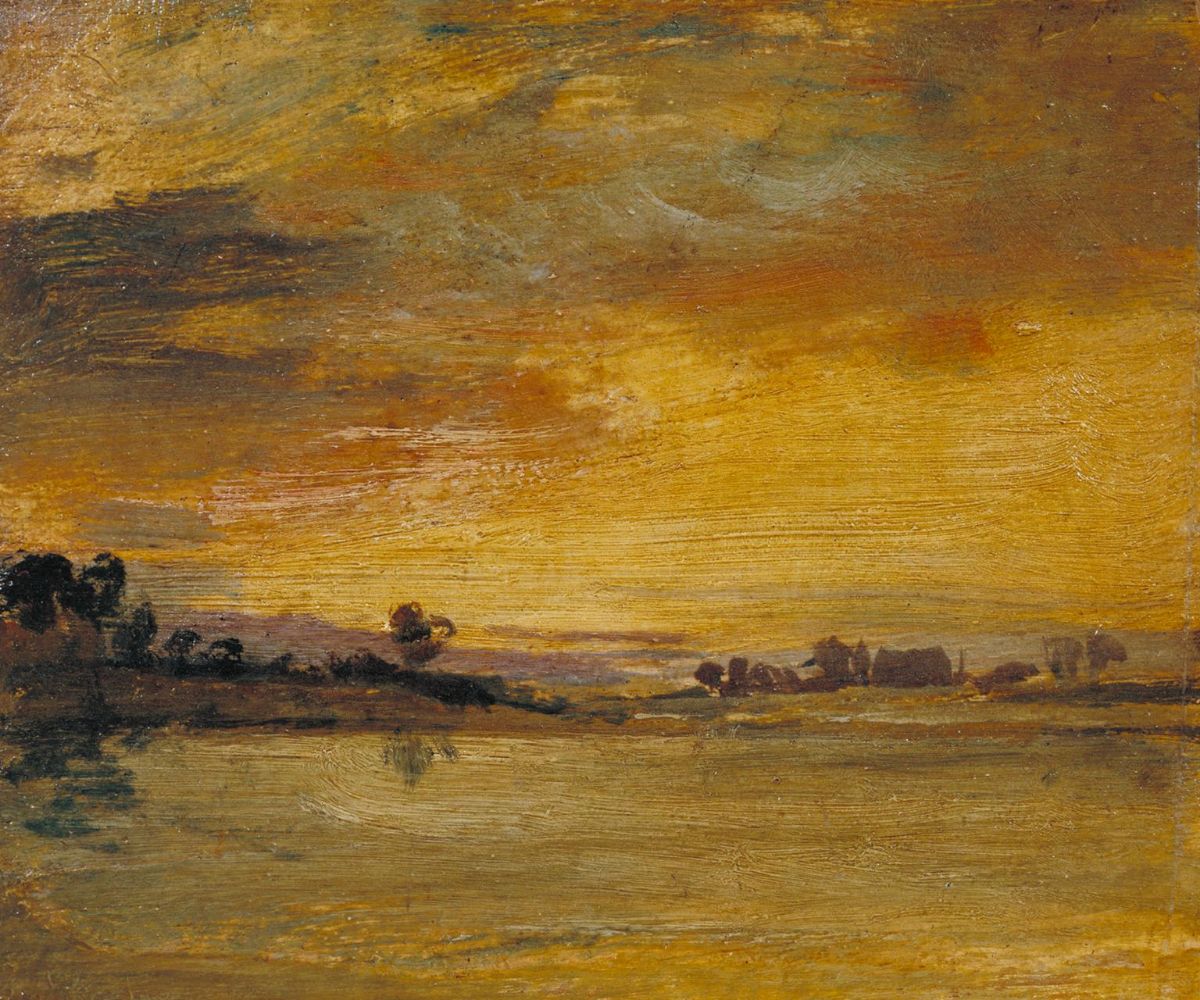 Monet’s water lilies are just blobs of oil paint, too, of course and a Turner sunset is yet more of the same; but we see so much more than this because of the artists’ ability to organise their blobs in such a way that they trigger relatable memories in our minds. 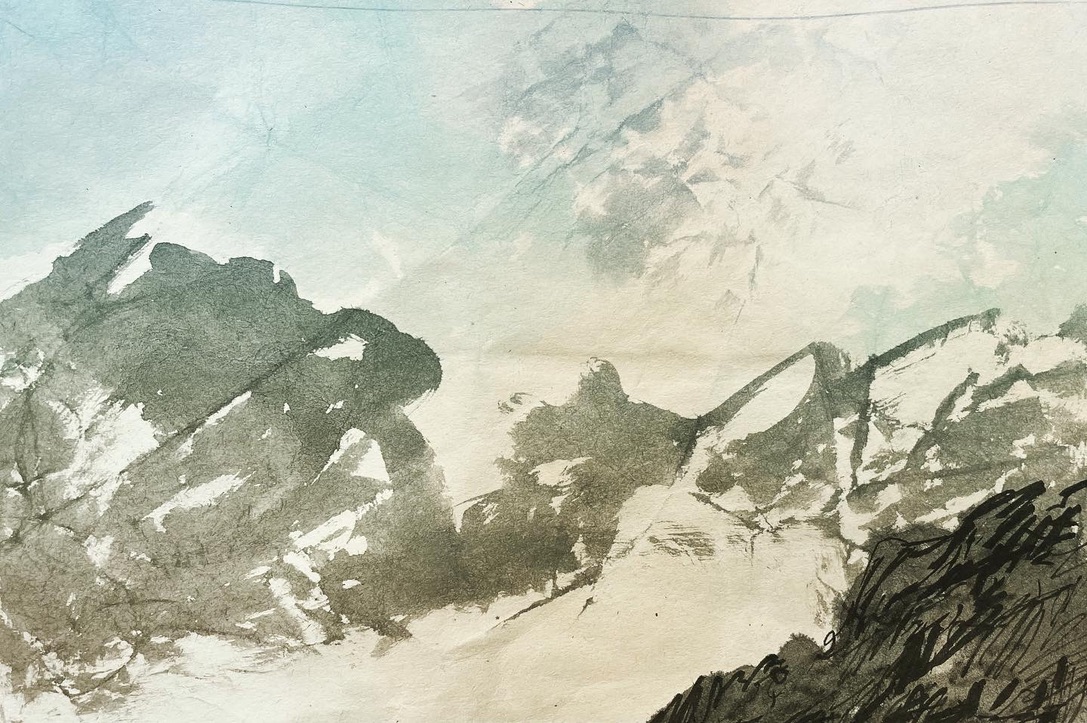 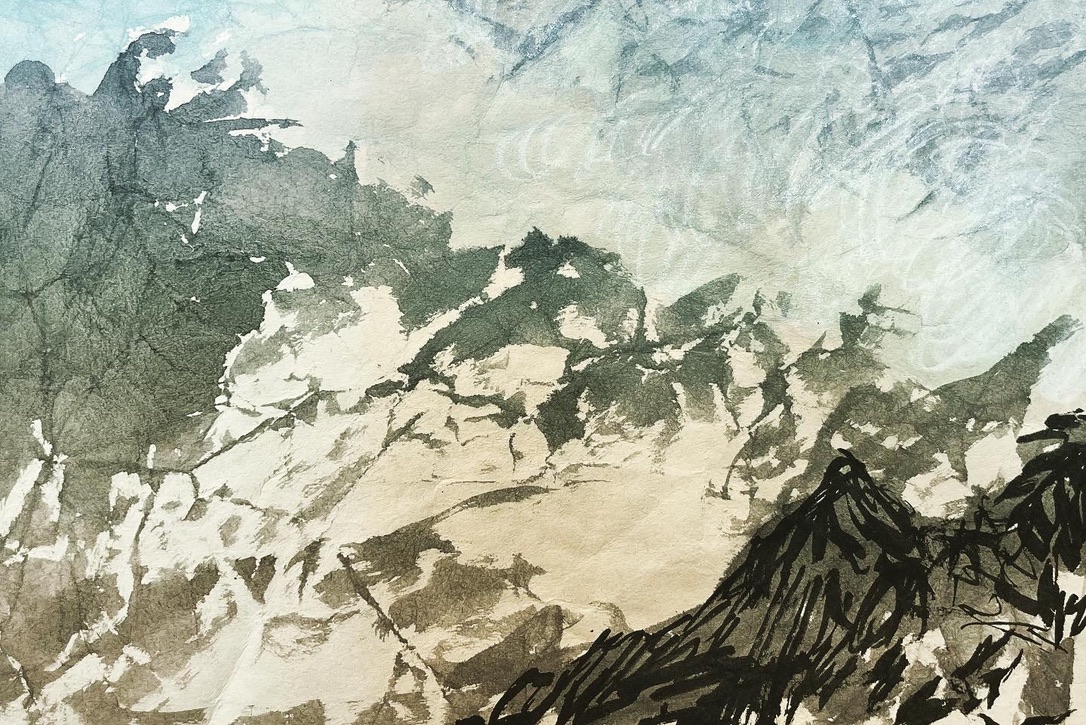 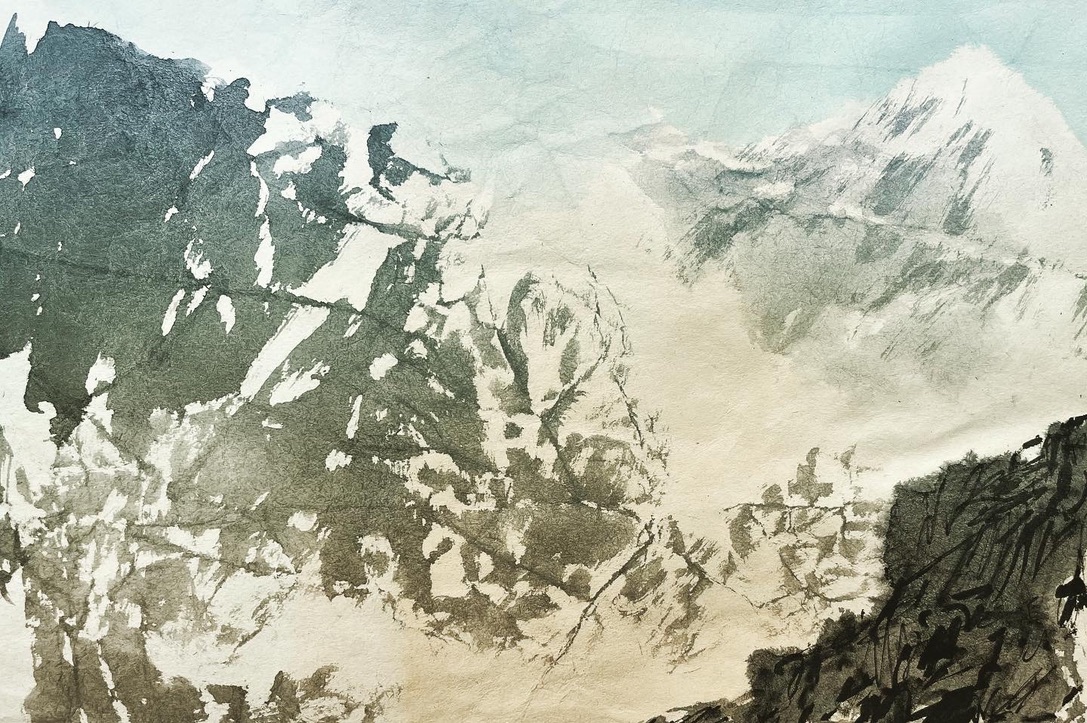 The above images, for example, are not mountains, but splodges of ink on crumpled paper that I subsequently ironed flat.

I got the idea from Alexander Cozens, a pioneer British artist who was painting landscapes before it became a respectable thing to do. The best painters of the day wouldn’t dream of lowering themselves to what Henry Fuseli of the Royal Academy called ‘mere mapwork,’ and directed their efforts to more grandiose themes from The Bible and mythology. But although he eschewed narrative and the human figure altogether, Cozens’ subjects were equally lofty and awe-inspiring, springing, as they did, from his own imagination through the agency of a method which he claimed to be as natural as the creations of The Almighty Himself.

What could be more natural than a blot?

Epigraph to Cozen’s pamphlet, “A New Method of Assisting the Invention in Drawing Original Compositions of Landscape,”  pubished in 1798 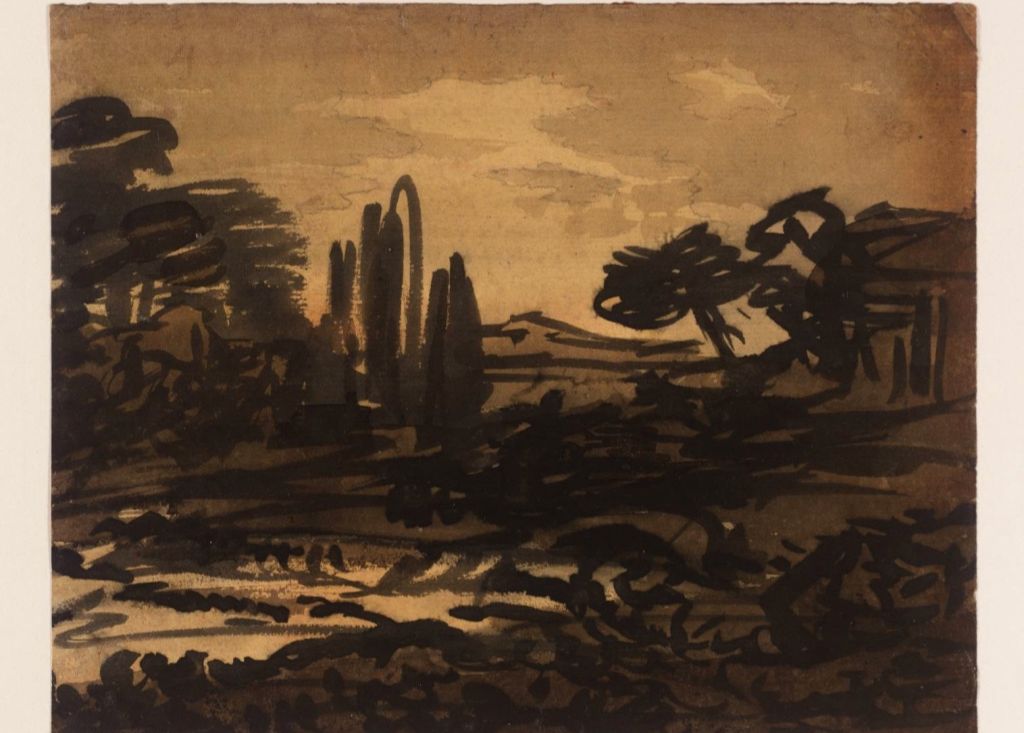 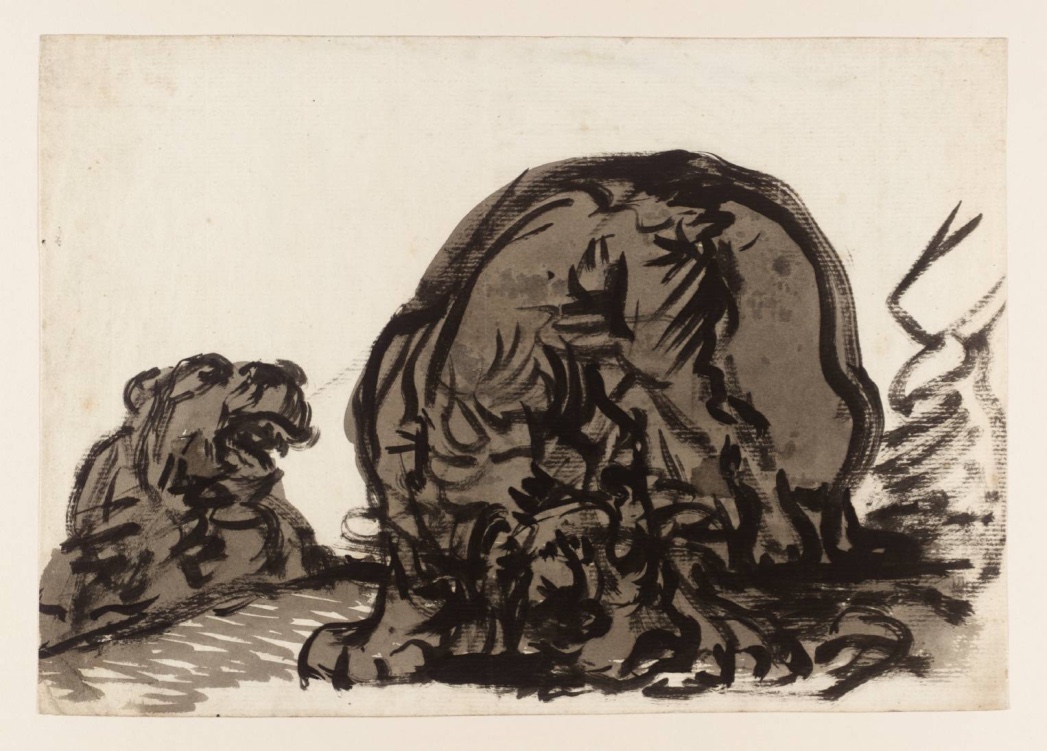 Cozens was a prolific blotter. Mountains, ruins, trees, temples and even tigers appeared in his hastily applied blobs of black ink, because he believed, as did Leonardo Da Vinci, (when recommending to artists the practice of gazing at a lichen-covered walled), that “from a confusion of shapes the spirit is quickened to new inventions.” But Cozens also claimed that “the use of blotting may be a help even to the genius, and where there is latent genius, it helps to bring it forth.” 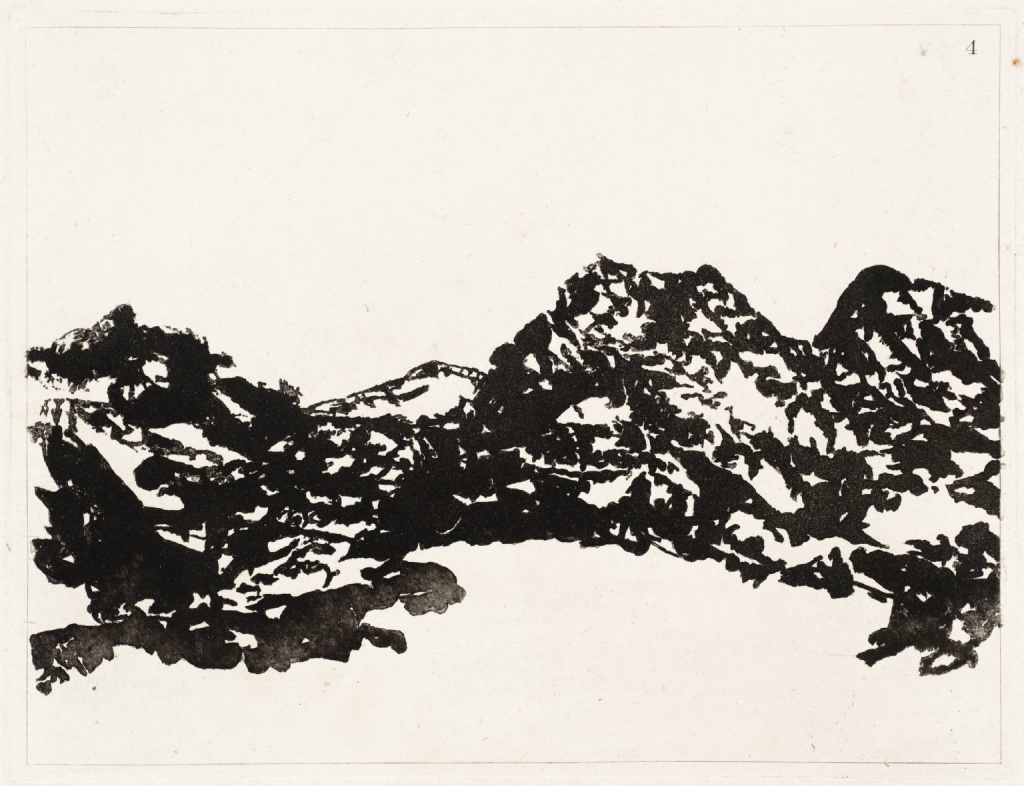 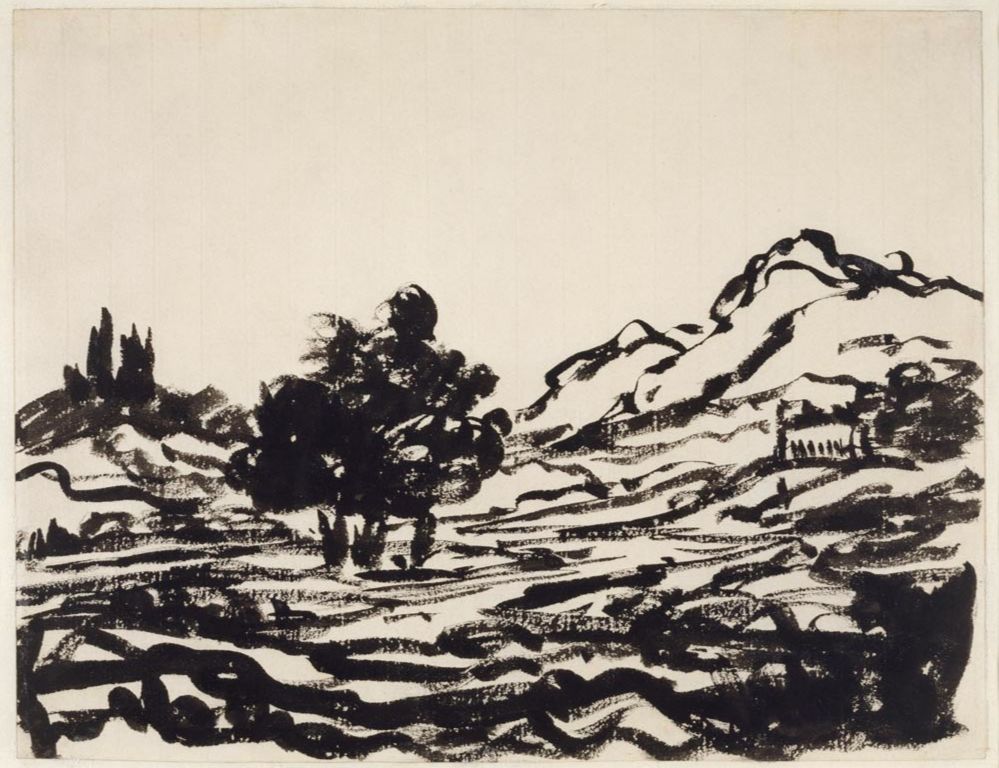 Cozens’ ‘New Method’ made his reputation, but while no less a personage than King George III helped sponsor his pamphlet, fellow artists derided him as the “Blotmaster General to the town.” After his death, in the same year that his pamphlet was published, one of the greatest landscape painters of the eighteenth century, John Constable, declared him to be “all poetry.” 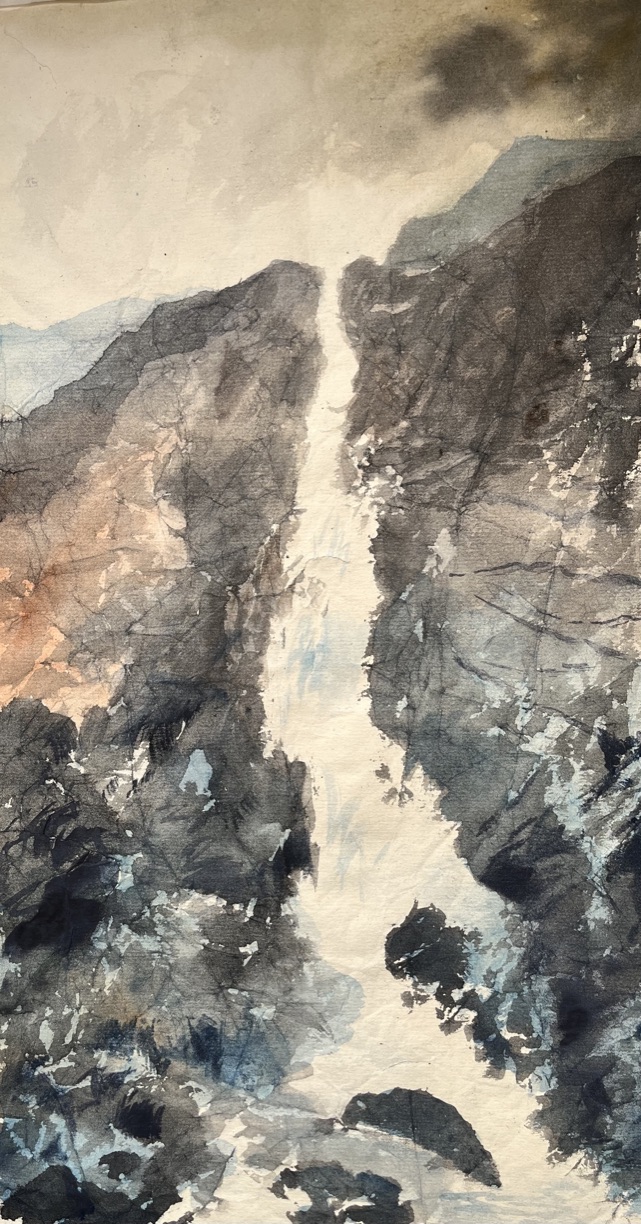 A Cozens blot landscape isn’t entirely the product of happenstance. His method requires that you, “possess your mind strongly with a subject” and he provides an exhaustive (and exhausting) list of landscape ideas in his pamphlet, to draw from. Then, he exorts the would-be blotter to “take up a camel hair brush, dip it in a mixture of drawing ink and water… and with the swiftest hand make all possible variety of shapes and strokes upon your paper.”

Your blot painting is then traced and transferred to watercolour paper and a more refined version of the original is worked up.
I prefer, though, to paint over the original to retain as much of the energy of those initial marks as I can.

Why did Cozens paint so many mountains?

Because, in eighteenth century Britain, ‘the sublime,’ was the fashion in art, literature and thought.

Regarded as an aspect of Nature, distinct from beauty, this was anything that excited intense emotions of awe or despair or both. Waterfalls, crags, chasms and ruins were all examples of ‘the sublime,’ which engendered in the viewer, feelings of insignificance, transience and terror that were, at once, pleasureable and painful. 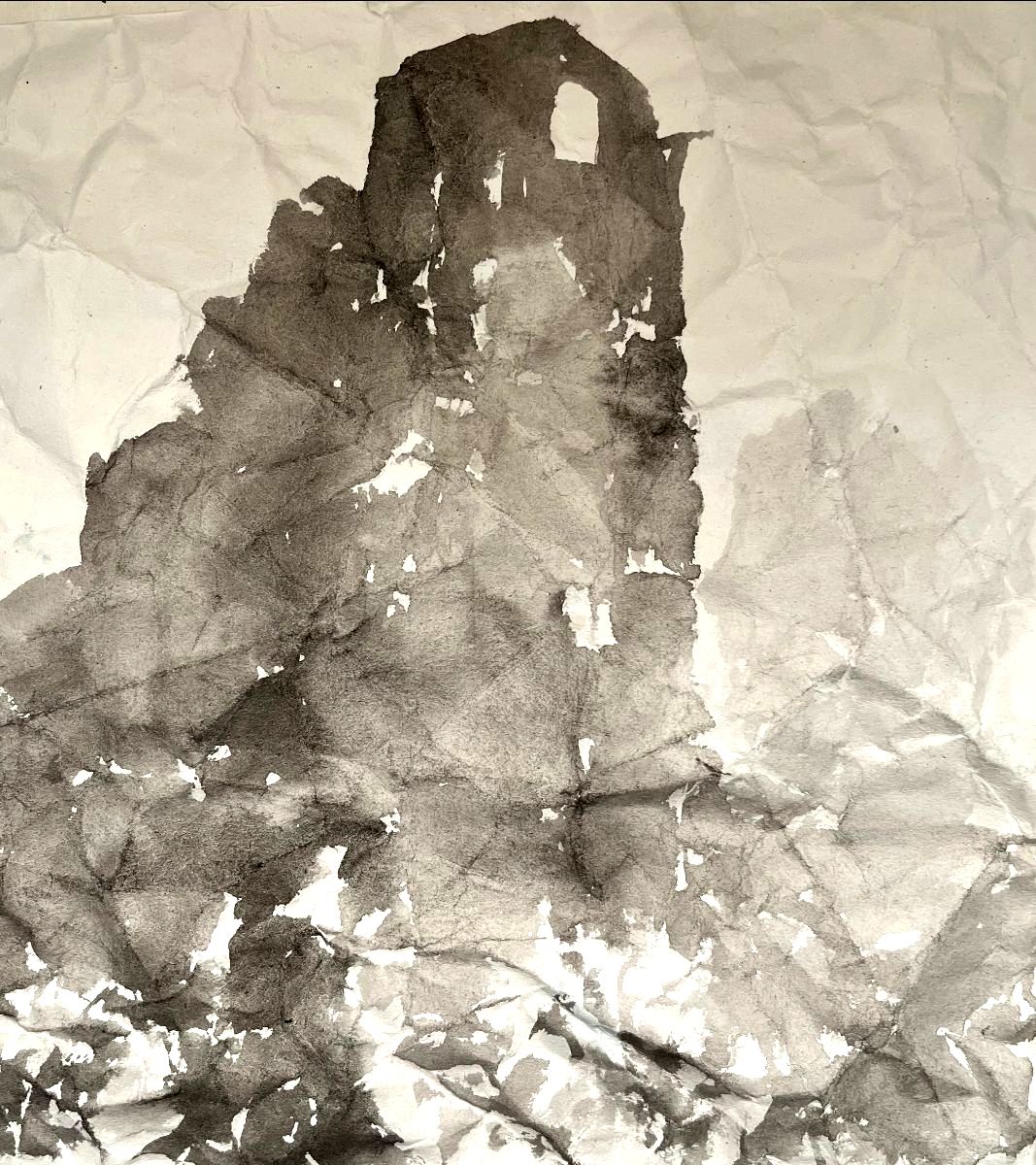 I’m not sure if my blots are painfully pleasurable or if they’ve brought forth my latent genius, but Cozen’s ‘Method’ has given fresh impetus to my interest in the art of landscape and more importantly, has encouraged me to play. It’s the unstructured, open-ended nature of play that teaches and encourages us to be our best and most creative selves.

After all, ‘the Art itself is Nature.’

Here's a little something to go with your brussels sprouts this holiday... Draw a grid,…

A long time ago, when I ran evening classes at the local college, I taught a student…

My latest commission is both the biggest and the smallest I’ve ever undertaken! After my artwork for Yapp Brothers in nearby Mere was short-listed for the wine list of the year award in 2013

Painting Between The Words

Jenny Holzer's solo exhibition at Hauser and Wirth, Somerset is predominantly about sex, war and death; a…