This summer, during the worst of the British heatwave, I was in Madeira, where the sun rises late and its heat is tempered by balmy, sea breezes. I’ve visited the island regularly over the past few years, but this time, I found the ocean swells too big for swimming and the hiking trails too precipitous for walking, so I spent most of my days, sitting with my paintbox and crayons, on our little balcony by the sea and wondering what I was going to do with all that blue.

Before I could answer that question, though, I had another…

Just how is an art teacher supposed to spend their free time? 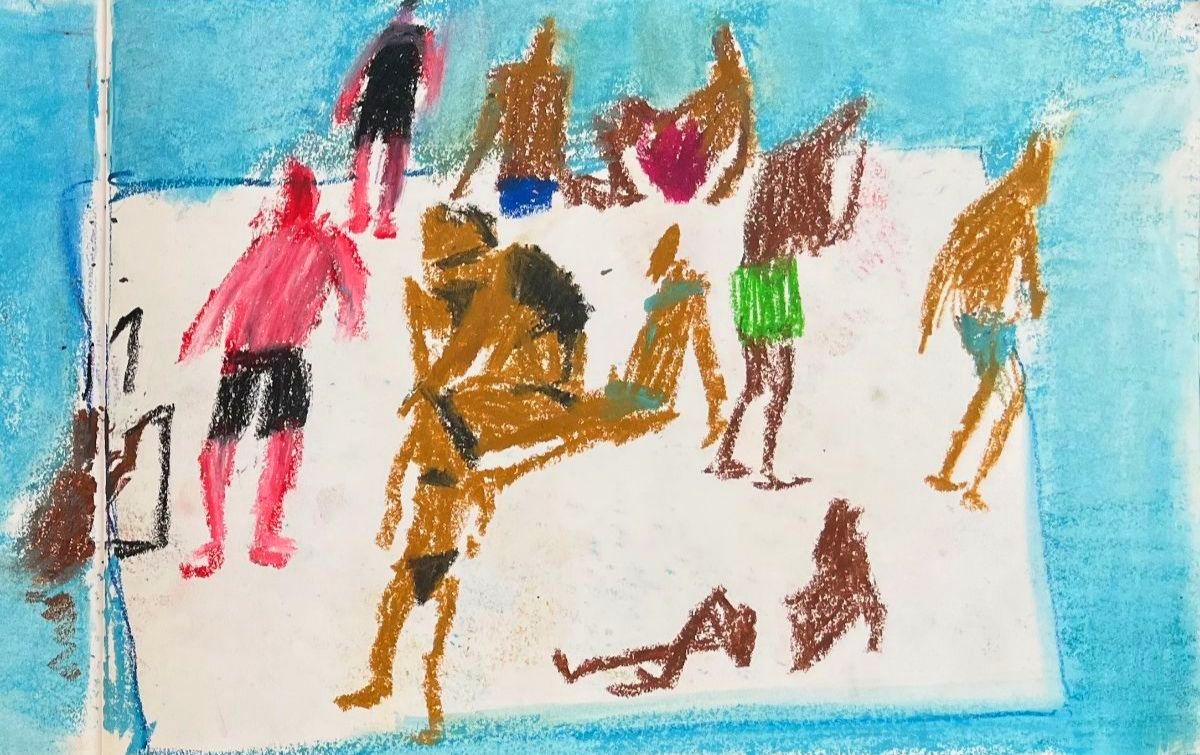 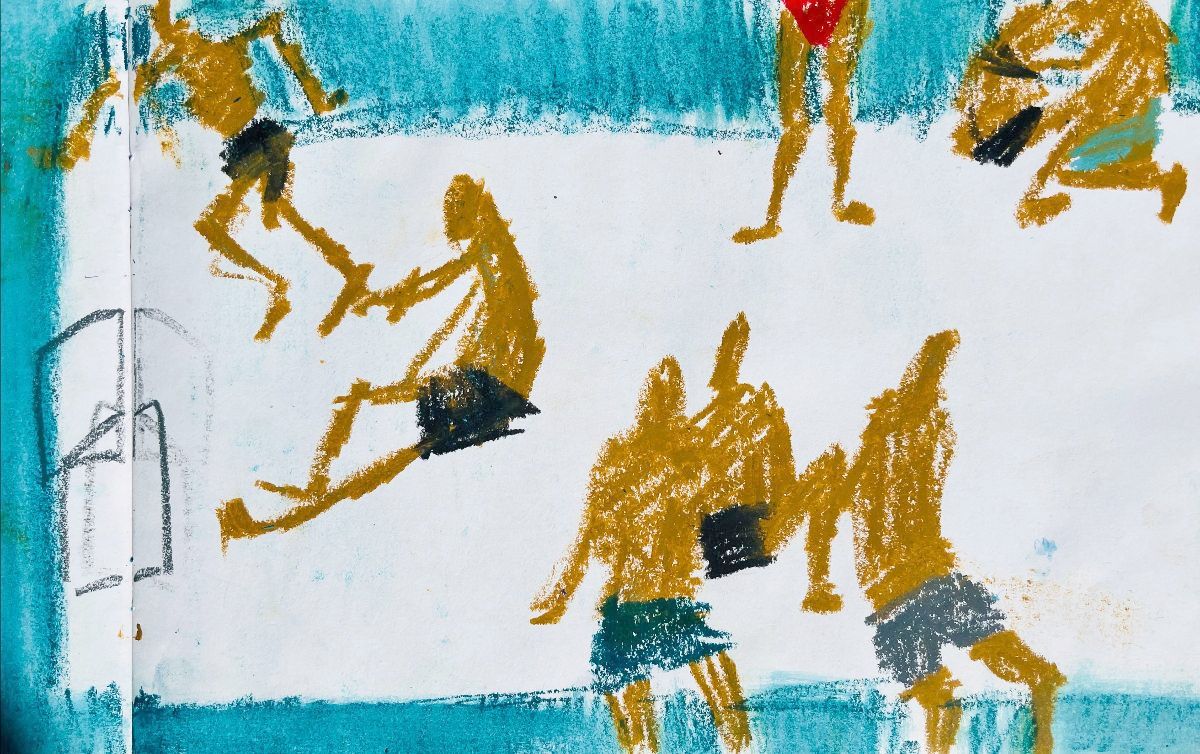 Painting their own pictures is the usual assumption, but do hairdressers cut their own hair or surgeons operate on themselves when they go on holiday? I don’t think so! Nevetheless, if walking and swimming was out of the question (and I’m not one for sunbathing), then there was an awful lot of time to kill before my favourite cocktail bar opened.

I found, though, that every time I started on a picture, my first thought was, “Could this be a lesson?” and before I knew it, the fresh and original idea I was developing turned into a classroom exercise and I was back at work!

One way around the problem seemed to be to rush up on the thing before I knew what I was doing!*

The trouble with making decisions about your work’s merits, whilst putting crayon or brush to paper, is that it puts the damper on what you could have achieved if you hadn’t been doing all that self-censoring. So, I tried to stay in the moment, not care about whether my work was any good or not and scribbled everything down without a thought about making art (more on not being an artist, later)! 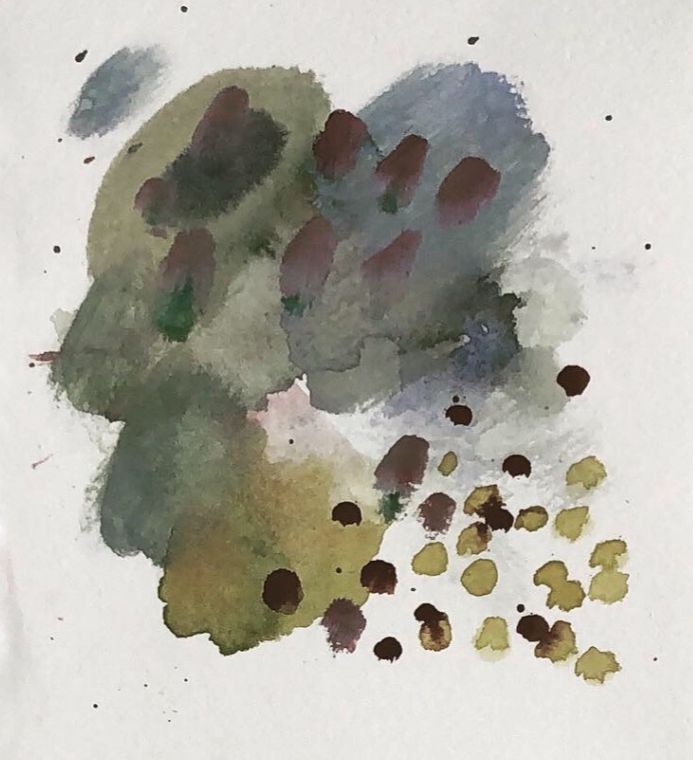 * I was chagrinned to realise that my slapdash drawings were actually akin to an exercise I’d already written up, based on Cy Twombly’s work (one that didn’t make it into my book, Tate: Master Watercolour). By eschewing technical skill altogether and painting in a deliberately hasty manner, Twombly sought to arrive at the essence of a memory without the encumbrance of the artist’s personality or style.
They may be only blobs, but of the fifty odd paintings I prepared for the book, this was one of the hardest to do! 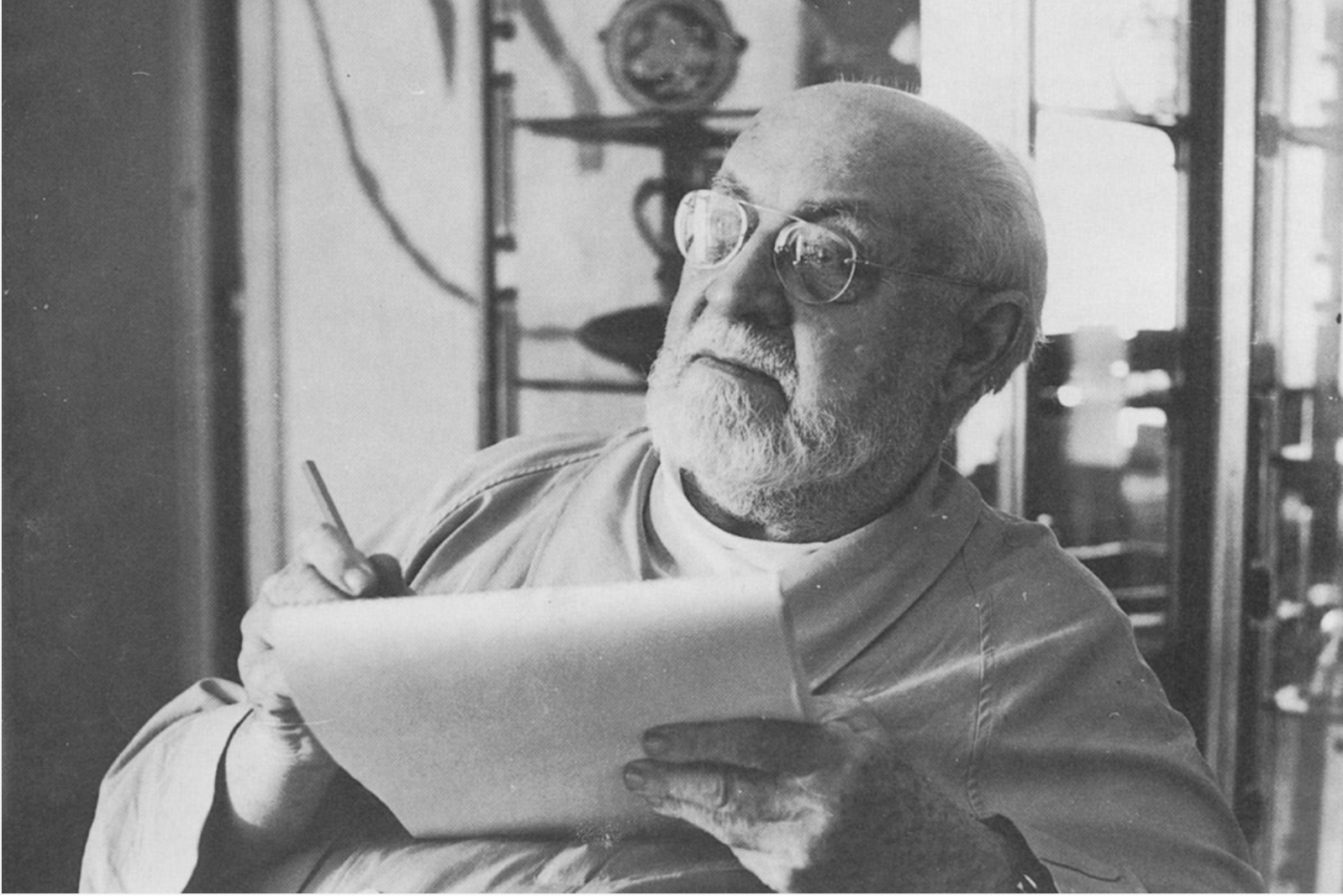 Henri Matisse said that to draw without pre-judging took a special kind of courage. You are on a journey without maps and must take each step without knowing where you are going. Anything else is merely following in someone else’s footsteps.

Looking at these sketches a few days later, I couldn’t say I was pleased with the results, but then, they hadn’t been produced with the intention of pleasing anyone, least of all me! They were simply a physical response to whatever had momentarily happened on my retinas.

A fortnight into our stay, we travelled to Porto Da Cruz on the north of the island, where the coastline is equally as intimidating as the South and the beaches, hammered relentlessly by the sea, are strewn with black pebbles the size of human skulls. Once again, the hiking didn’t go well for me and after losing my nerve on a high path and making my way disconsolately back to our hotel, I passed a clump of irises, growing wild upon the clifftop, their bright orange petals blazing against the deep blue of the sea.

“Those complementary colours,” I thought, “Would make a great lesson on Chevreul’s Law of Simultaneous Contrast.”** 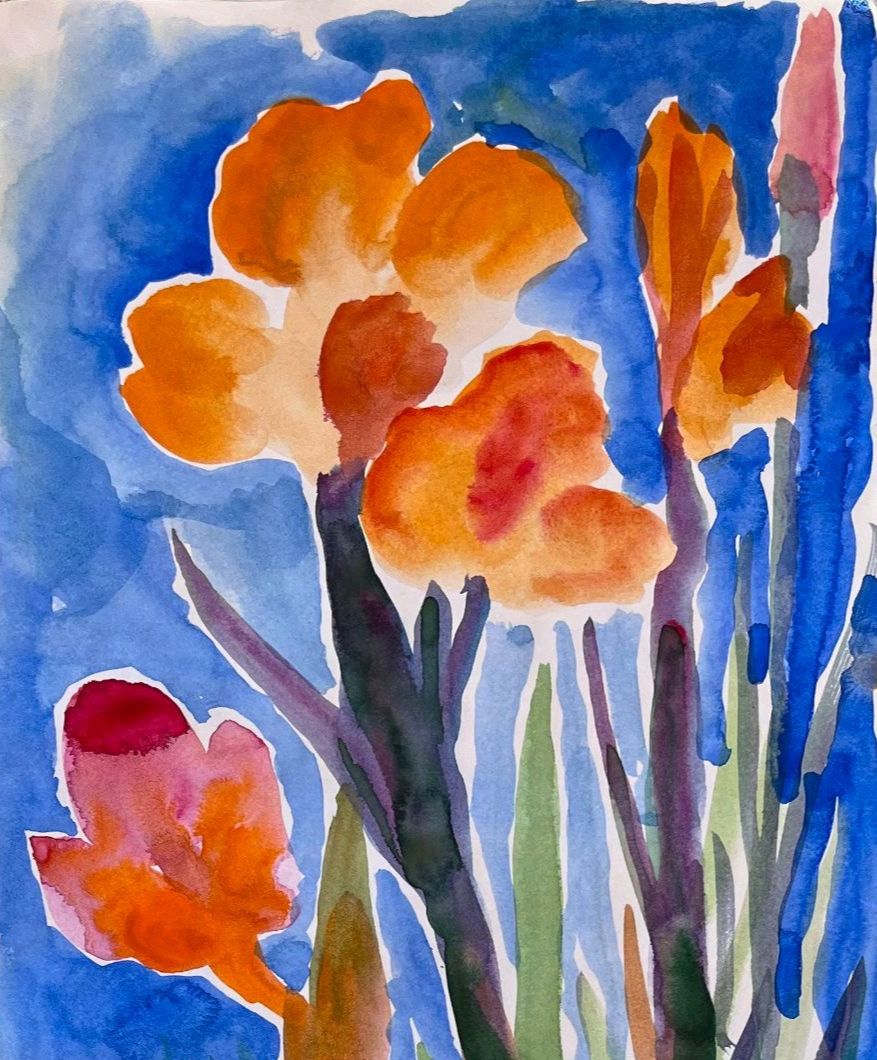 **Eugène Chevreul’s Law of Simultaneous Contrast states that our perception of a colour will change according to the influence of any adjacent colour;  an effect which is particularly strong with complementary colours. Orange, for example, is reinforced when placed next to blue as the blue generates an orange after-image on the retina. Conversely, blue is reinforced by the blue after-image that is generated by its proximity to the orange.

Back at our hotel, I made up my mind that my irises were definitely not going to be part of this autumn’s lesson plans and hurriedly, squeezed Red Orange from the tube directly onto wet paper and let it run. For the stems, I squeezed blobs of Forest Green and Dioxazine Purple onto the paper and allowed them to run in the opposite direction. 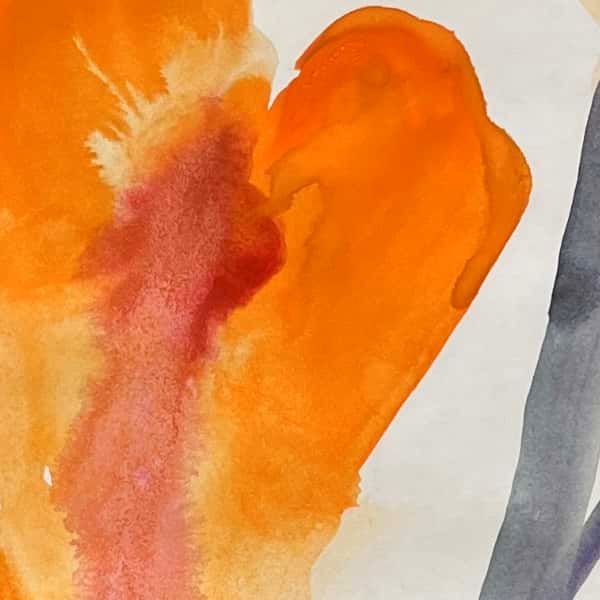 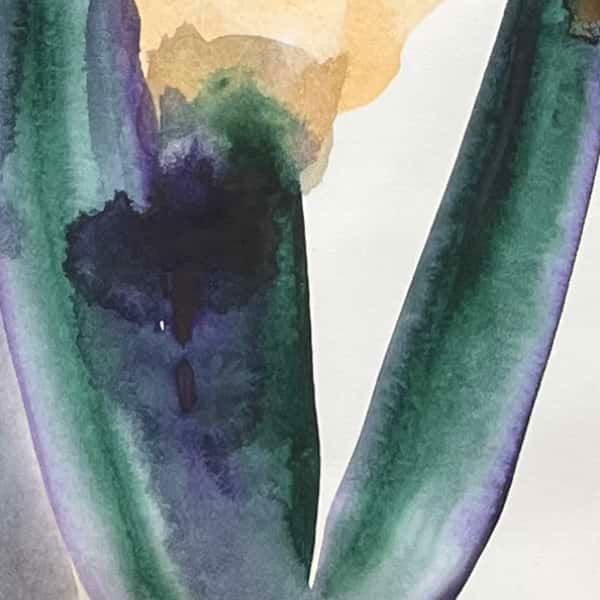 I wasn’t painting irises so much as using irises to find out what watercolour could do. It was the brushstrokes I was making that intrigued me, not the flowers. I loved seeing how the colours mingled on the paper and how the accidental blobs and blotches combined with the more deliberate marks until my painting had created itself in front of me.

Towards the end of my busman’s holiday on Madeira, I dispensed with any subject matter altogether and just let watercolour be watercolour.

For an entire day of blobs and blotches, click here (and scroll down)! 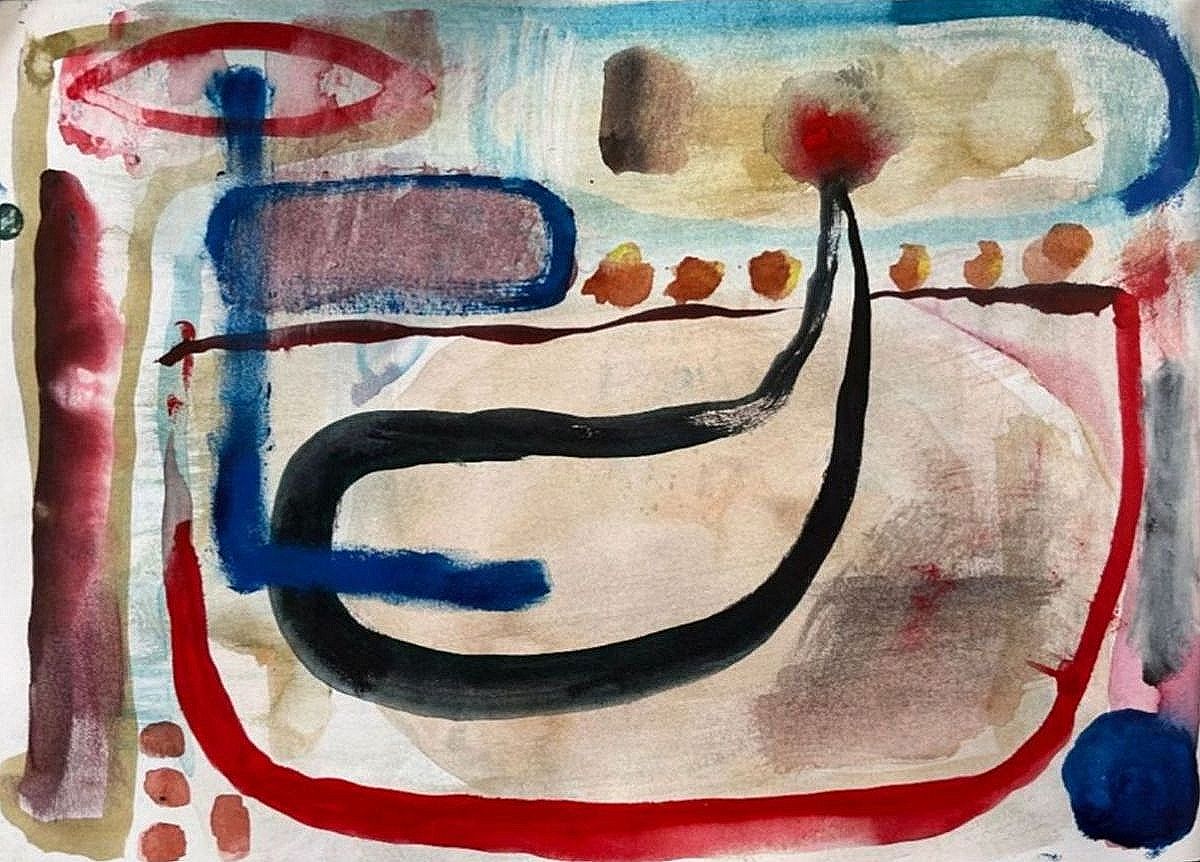 Painting isn’t a matter of what Henry Fuseli, Professor of Painting at the Royal Academy, called ‘mere mapwork.’ What you feel or remember about a landscape (or a flower) is equally as important and perhaps, even more so because it’s your very own, personal response to the subject rather than an attempt to conform to an accepted standard or to prove to yourself that you’re not wasting your time! 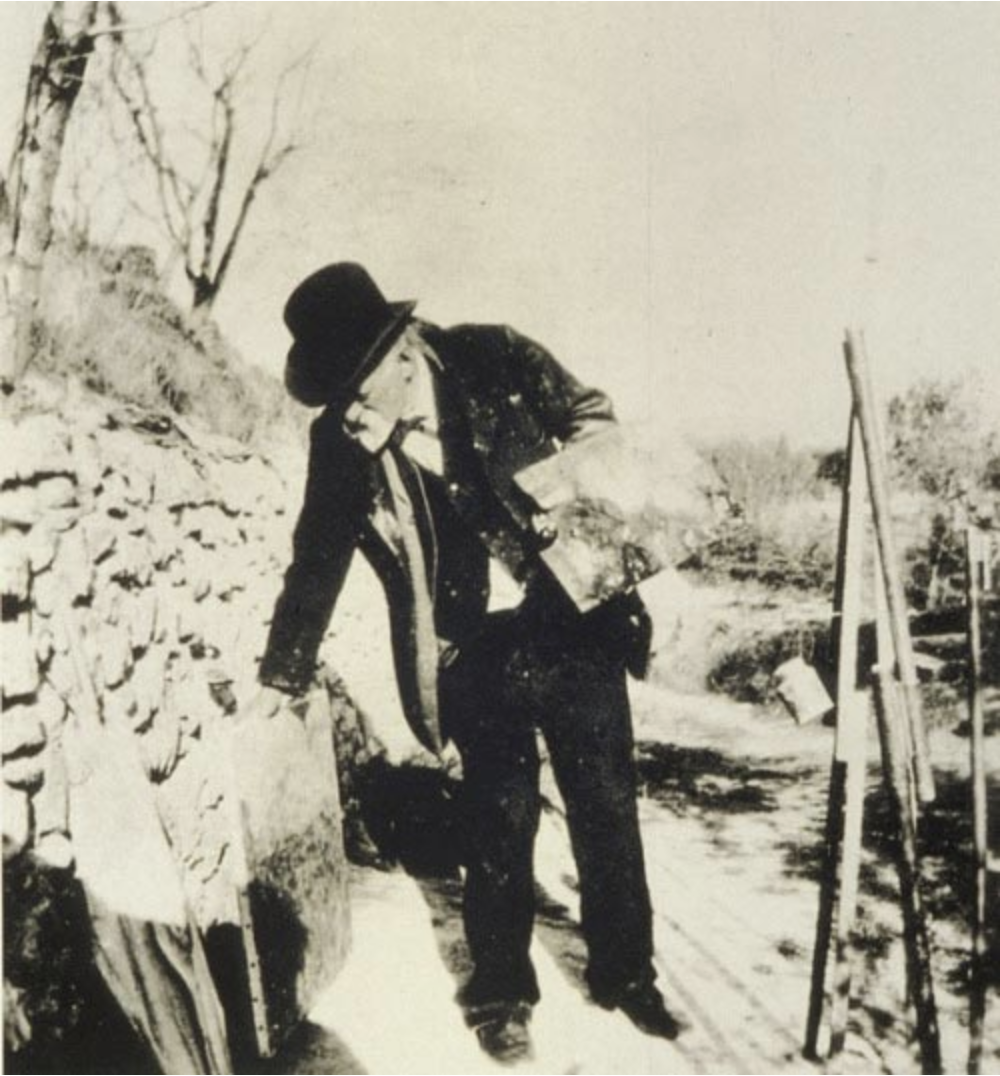 When Paul Cézanne was sequestered in the South of France, painting Mont St Victoire over and over again and still-life after still-life, in his attempt to break free from Impressionism (which he felt had become academic and stale), he was most concerned that others would regard him as ‘a foolish old dreamer.’ So he called himself, not an artist, but ‘a friend of art’ and the ‘primitive of his own way.’

That’s an honest calling, I believe, for anyone who has the urge to push paint around.

What colour is your sky?

This September, as we approached the final day of my two week stay at Studio Paradiso,…

Where Your Art Really Begins

Who needs a painting holiday? – Me!

You can paint anywhere, of course. Beautiful scenery and fine food and wine aren't absolutely…